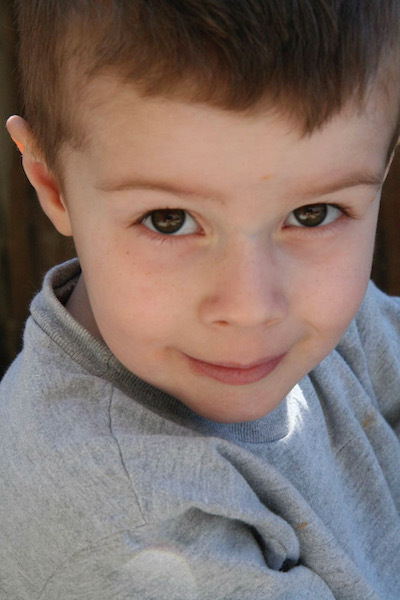 In light of Christ’s strong words, I went to my two-year-old grandson for advice on being childlike. I caught up with Jaden as he finished breakfast in his highchair.

When I asked Jaden about his future plans, he banged a spoon on his bowl to hear the ceramic ringing sound. Okay, so this child was absorbed in the present and not worried about the future.

Oh, that I might be so trusting of my Father’s watchcare that I’d relax into the present. Lesson one, a child trusts.

I asked Jaden what his joys were. The cherub cheeks puckered as he produced the word, “egem.” His mother interpreted this as “eggs.” He loves eggs. Information from other sources revealed he also enjoys playing with trucks, balls, and loves his bath. Whatever simple joys are available are what he delights in.

This insight cuts a sharp contrast to the schemes I hatch for increasing pleasures. Lesson two, a child is grateful.

I asked Jaden to list his accomplishments. The only reply was, “Uh oh.” I believe the response was more reflective of his immediate challenge with eggs on his spoon, than it was of chagrin for not having founded a charity, led a cause, or gained international acclaim. To cover his modesty, his mother rattled off a list—walking, sleeping all night, eating solid foods, a 250 word vocabulary.

Prayer: Father, grant me the trusting, grateful, loving heart of a child.