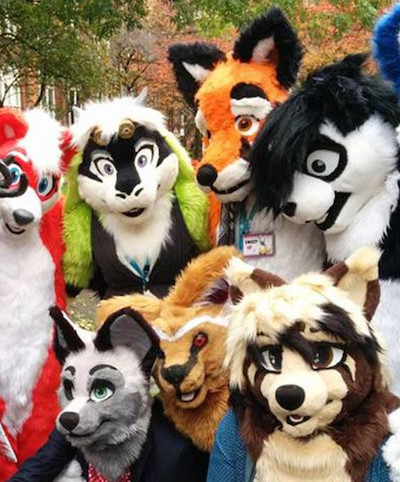 For we know that if our earthly house, the tent we live in, is dismantled, we have a building from God, a house not built by human hands, that is eternal in the heavens. (2 Corinthians 5:1)

Our son, Aaron, invited Dani and me to his furry convention. Furries are a subculture of young adults who wear character costumes made of artificial fur. There were giant squirrels, puppy dogs, and fantasy creatures of rainbow-colored fuzz.

Aaron wore a brown and white Australian sugar glider costume. The large eyes and velvety ears made for a six foot tall huggable masquerade. Most of the participants were there to enjoy friends and laugh at one another’s creations. There were, however, a few mystics who believed they were born as a koala bear, or a dragon, and, somehow, got trapped in a human body.

I also take my temporal costume far too seriously. This world becomes my absorbed reality as I adopt the false identity of my physical aspect. I look at you and invent perceptions based on your exterior appearance or your present circumstances.

I have a furry mentality.

In actual truth, we are not our costumes. I am not only this physical body, permanently disfigured, and destined to sin forever. By joining myself to Jesus, I received a new existence. It came with a promise for a new body, and a new heaven and earth as well. For now, I am to live inside this character suit, but be fully aware of my true identity as I look out the temporary peepholes.

One day, the suits will come off, as they did on the mount of transfiguration. When the disciples saw Jesus, Moses, and Elijah, they appeared in glorious splendor with clothes as bright as a flash of lightning. That’s what lies beneath the furry suit—glory and splendor. For those in Christ, that’s the real you and the real me. We are the immortal children of God, destined to dwell in blinding majesty within his kingdom—not here, and not in these costumes.

Prayer: Mighty Redeemer, help me know who I really am in you.