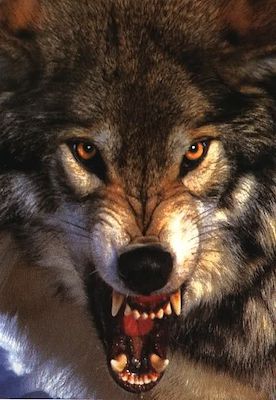 Watch out for false prophets, who come to you in sheepʼs clothing but inwardly are voracious wolves. (Matthew 7:15)

Yellow eyed wolves stalked a flock of sheep, measuring each animal’s weaknesses. Converging on their chosen victim, they made a show of curling their lips and growling just out of reach of the ram’s lowered horns. It was a ploy of distraction. The real killer stealthily crept behind, pounced on the haunches, and pulled the sheep down.

I met a sweet, gray haired grandmother who practiced the blackest of treacheries. Her victim was a dear friend of mine named Ann. Near the end of life, Ann became a follower of Christ. This supposed friend tried to drag sister Ann into heresy. She was sly. She never mentioned Satan or spoke against Jesus but painted him as one of many friendly spirits they could call upon. With candles, crystals and chants she invoked her spirit guides. This was a faith wolf.

Faith wolves stalk those with a weak or deformed knowledge of Christ. While the majority of the pack howls about atheism, the real killer sneaks up behind with false teachings about Jesus. The devils behind these lies know that missing faith and misapplied faith have the same result—eternal separation from God.

Having faith is not enough. It must be a sincere faith based on the real Jesus. Thankfully, we’re not abandoned to the human conjectures that are so rife in the world. The Bible objectively records the advent of Christ, while the resurrection validates his authority to save. To know the real Jesus, we have only to examine Scripture.

The ordeal served to refine sister Ann’s faith. She realized her one hope against faith wolves was to hide behind the true Shepherd defined in the Bible. She rejected the sorceress, told her never to return, and wrote a homily to be read at her own funeral. Her powerful message convinced at least two others to follow Ann into paradise through the real Jesus.

Prayer: Strong Shepherd, protect me as I dedicate myself to knowing you.