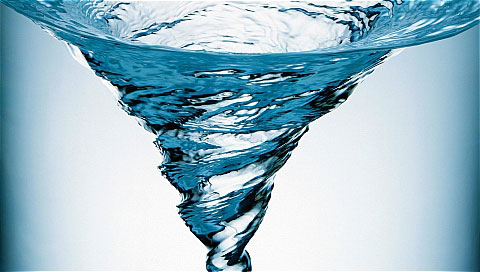 When I sin, I feel far away from God, and when I’m far away from God, I sin. The whirlpool goes round, sucking me toward hell’s black hole. Each time I repeat my pet sins—envy, indifference, gluttony, worry—I’m pulled further down.
I begged to get out of the whirlpool of temptation but my heavenly Father had a different plan. He told me that temptation is not sin and I need to learn how to live within its grasp because the fight will make me stronger.
During his sinless thirty-three years on earth, Jesus never left the whirlpool. He felt its tug when Satan baited him in the desert. The whirlpool must have caused his struggle to accept the cross. Our Messiah demonstrated that wholesale escape from temptation isn’t our Father’s purpose for this era.
The vortex froths white and horizontal at the top, black and vertical at the bottom. Down on the funnel’s walls, failure is an eventual certainty. When I dabble in the lower regions and tell myself it’ll never get a complete hold on me, it’s already too late.
The key to success isn’t the removal of temptation but in living near the top. When I replace worldly pastimes with the worship of Jesus, I rise to the empowerment of the outer edge. Up near heaven’s luminance, the downward pull doesn’t overcome me.
For now, I have to live inside the whirlpool but I don’t have to attempt wall surfing.
Prayer: Holy and beautiful Light, I choose to live near you today.
0
0
0
s2sdefault