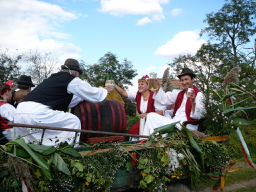 Then he said to his disciples, “The harvest is plentiful, but the workers are few. Therefore ask the Lord of the harvest to send out workers into his harvest.” (Matthew 9:37-38)

The Hungarian countryside was like those repeating backgrounds in cartoons. In a hamlet of tile roofed houses, we negotiated a horse plodding before a cart heaped with manure. Regaining the open road, we passed a farmer and his smock clad wife pitchforking compost around verdant crops. Then the scenes repeated with humorous predictability.

The key to Hungary’s agricultural triumph is organic fertilizer. While other countries spew chemicals over crops, Hungarians have mastered the art of repurposing animal waste. It’s an art because spread too thinly the plants starve, whereas an application that is too thick burns vegetables under the potency.

Raising up a crop of salvation is much the same. It needs harvesters armed with fertilizer. In Hungary, and in other places, I’ve witnessed the impact of fertilizing the spiritual harvest field with monetary resources. If insufficient funds are given, the gospel starves and souls languish toward hell. If money is indiscriminately heaped on, the gospel burns under materialism.

Sadly, I found the fields infested with harvesters who’s first priority was physical comfort. Then I also had the joy of meeting missionaries to their own countries like Rufus in India and Dave in Zimbabwe. These servants were so consumed with bringing others to Christ that seeking daily sustenance was often ignored as a nuisance.

Not too thin, not too thick simply means that in addition to sending finances, I roll up my sleeves and hoe a few rows alongside missionaries. Time spent in their world should not become micromanagement but merely an opportunity to reveal those true artists of gospel fertilizer whom I am to support with finances, prayer and relationship.

Prayer: Lord of the harvest, what a privilege to pray and pay for workers.